Skip to content
You are here:Home-Uncategorized-The Shocking Truth about Electrocution Injuries

The Shocking Truth about Electrocution Injuries

No engineering achievement has had a greater impact on human culture than electrical power. As electrical power gains in significance and becomes more vital in today’s modern society, it poses an equal threat in terms of safety. Accidents do and will occur, especially among electrical workers who handle commercial electrical power lines everyday. Recently, the use of electrical power has even made it into the mainstream of law enforcement. Non-lethal electrical weapons now provide a new intermediate force option for the police. Electrical shock is one of the leading causes of work related injury, comprising 7% of all workplace fatalities. 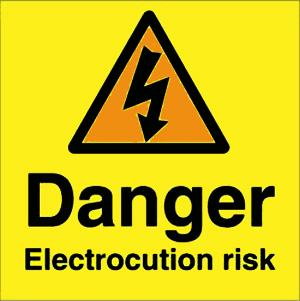 The exact incidence of non-fatal shocks is unknown, because many victims do not report injuries. The economic impact of industrial electrical injury in the U.S. has been estimated to be in excess of one billion dollars annually.

What Is Electrical Injury?

Electrical injury occurs when the body experiences levels of current that alter electrophysiological function or cause tissue damage. The exact tissue damage mechanism and damage level depend on a host of parameters: the characteristics of the power source (DC or AC current, voltage, frequency, etc.), and the part of the body through which the current passes. In general, tissue damage depends on the strength of the electrical field, the frequency and the duration of current flow and the tissue type exposed. Most common injuries result from contact with commercial electrical power sources (50-60 Hz) in the home and workplace. Microwave, radio-frequency, light irradiation, and other injuries are less common.

How Electricity Affects the Body

Parts of the body is designed to be very sensitive to electrical signals. Nerves and muscles communicate via small electrical pulses. Abnormal electrical current can directly stimulate nerves and muscles. As little as 1 milliampere of DC current passing through the fingertips will produce pain. More current is required to stimulate muscles in the forearm. When direct muscle stimulation occurs, the brain is no longer in control of the muscle and the person being shocked cannot move the hand from the power source. This “no-let-go” phenomenon occurs when the electrical current going through the arm is more than 14-16 milliamperes. At slightly higher levels, the whole arm goes into contraction and the resulting involuntary muscle spasm may lead to sprains and fractures.

When electrical shock current passes across the chest, it can affect respiratory and cardiac function and lead to Figure 1: Electrical curfatal cardiorespiratory arrest, which usually rent can directly activate requires at least 20 milliamperes. When nerves and muscles along contact is through an electrical arc, thermoacoustic blast can also cause significant blunt tissue trauma.

Damage to biological tissues occurs by at least two mechanisms: Joule heating and Electroporation. These mechanisms lead to increased cell membrane permeability and energy depletion. In Joule heating, the passage of electrical current through tissues causes their temperature to rise, leading to disruption of cell membranes at temperatures greater than 44°C, disruption of intramolecular bonds in proteins with denaturation at slightly higher temperatures, and denaturation of DNA at temperatures above 85°C. Electroporation, the breakdown of cell membranes, occurs when there is more than 0.8 to 1 V of transmembrane potential. Most cell membranes rupture in less than one millisecond.

Other Mechanisms of Injury

Occasionally, injuries occur by radio-frequency (RF) current, or microwave-frequency (MF) current, though these are uncommon. The common microwave’s field penetration into tissue has a characteristic depth in the range of 1 cm. Small molecules like water, when not bound, are able to follow the field up to the gigahertz (109 cycles/sec) frequency range which may cause damage through tissue heating. Victims present with pain and subcutaneous edema in the exposed area. The table below provides a basic classification of electrical injury according to the frequency of electrical current involved.

Electrical shock injuries are extremely complex and may manifest in various ways. Because normal physiology involves so many applications of electrical forces, ranging from neuromuscular signaling to coordination of wound healing, biological systems are very vulnerable to supraphysiologic electrical fields. Therefore, even when the injury does not involve any visible tissue damage, electrical trauma survivors may be left with significant consequences. Although much remains to be determined, considerable progress has been made in characterizing the injury and developing effective therapies.

Today there is greater recognition of the consequences of the neurological and neuromuscular effects of electrical injury. Even brief electrical shocks may result in permanent damage to components of the nervous system resulting in subtle abnormalities or persistent pain. The impact of electrical shock on brain function can be immediate or delayed depending on the path of the current. Electrical injury often leads to problems with neurocognitive function, affecting speed of mental processing, attention, concentration, and memory. Electrical injury is also associated with a high rate of psychiatric morbidity including major depressive disorders, anxiety disorders, and post-traumatic stress disorder (PTSD). In addition, a number of other psychiatric symptoms have been reported, including phobias, irritability, psychosis, sleep disturbance, as well as symptoms of the post-concussion syndrome (headaches, tinnitus, and concentration difficulties). These problems are commonplace regardless of whether there is direct brain exposure to the electrical current. In addition, anxiety and depression both play a significant role in pain perception. These psychiatric issues must be managed simultaneously along with establishing various approaches to pain management.

Many case studies have reported diverse neuropsychological effects associated with electrical injury, including confusion, visual disturbances, memory loss, compromised intellectual function, and aphasia. Longitudinal follow up investigations are being developed to address issues such as the progression of neuropsychological dysfunction and psychiatric disturbance in electrical injury patients.

About the Author: admin